Oblong folio (390 x 252 mm). 118 numbered ff. (but 115: ff. 96, 106, and 112 skipped). Calligraphic preface by Hörmannsperger, 58 full-page textile designs by the same, mostly in red, blue, green, and gilt (including one folded, double-page sized specimen and 4 ff. with 2 designs each), 7 splendid gouache washes raised in gilt and silver; bound in between these are a total of 52 engravings on 48 plates, all in splendid contemporary colour raised in gilt and silver. Contemp. marbled boards.

Unique, museum-quality document of late Baroque craftsmanship among the urban Third Estate: apart from 58 meticulously executed textile designs, the album contains seven large-format gouaches showing the self-assured author practising his trade in his workshop, advertising and selling his wares to customers, as well as playing music and even bowling, but also attending the general meeting of the Viennese blanket makers. The engravings which Hörmannsperger inserted between his own works all show mundane subjects (dwarves, soldiers, caricatures, etc.): thus, his autograph textile designs and gouaches are interleaved with some of the rarest and most charming pieces produced by the 1720's Augsburg school of engraving.

The album is introduced by a self-portrait of the 26-year-old Hörmannsperger in his workshop (with his compass and one of the later-included textile designs lying on the table); on the opposite page he offers a brief preface to the volume: "for true art speaks for the master: here is a book, all mine, with many drawings, as they will be seen, all drawn by me, though I say so myself, with much time, labour, and trouble [...] I, Johann Frantz Hörmansperger" (transl.). The captions to the splendid gouaches prove the author's humour (sometimes bawdy) as well as a trait of surprising self-confidence. Pitching his self-plaited blanket to a female customer, he addresses her: "My dear lady, here's a fine blanket for you - you may well stretch yourself under this: one and a half ells wide and two in length; perfect for flipping over with your husband underneath" (transl., f. 84). Another image shows him selling saddlecloths to military officers ("we'll have these and take them into battle", f. 86); yet another shows him bowling in a Baroque garden at the weekend ("All gay and jolly, for we are journeymen of the trade: and so the virgins may be; they will not be bored - here is red wine and white, so well we may make merry", f. 94) and dancing ("Be merry all. Musicians play! Thus do the blanket makers frolic and dance with pretty girls until their shoes may fall to pieces", f. 104). The final leaf shows an apprentice received into the society of blanket makers at their quarterly general assembly ("The blanket makers convene today to discuss what concerns the society: the young man must have learned his trade; he is not too tall nor too small. But he must put in his time, until he is made a journeyman", f. 118). Some of Hörmannsperger's ornamental designs, created with the use of a compass, include centerpieces showing armorial or figural motifs; one design (f. 113) is apparently a commission for Emperor Charles VI (bearing his monogram and Imperial insignia); according to the later caption, it was indeed executed for him.

Between his own works Hörmannsperger bound engravings by the great Augsburg masters of his age, all splendidly coloured and raised in gilt and silver: eight engravings from Elias Bäck's dwarf series (fencing school, drinking, gluttony, and tobacco addiction), a complete cycle of the seasons and the life stages of man by Martin Engelbrecht ("Der Menschen Jahr Veränderung"), a total of 19 of the famous engravings by Pfeffel, Schmidt, and Engelbrecht showing a soldier's life (two with movable parts), as well as a fine broadsheet by Albrecht Schmidt showing the seven Honest Swabians, and finally an untitled eight-page cycle showing the female tempers.

The Austrian and especially the Viennese bedclothes were known for their high quality throughout the continent. During their golden age in the 18th century they were exported to all European courts, as well as to Greece, Turkey, and many oriental countries. At the time this album was drawn up, there were ten masters of the profession in Vienna alone creating blankets and mattresses as well as backpacks and cuirasses.

Provenance: acquired in 1893 "from Mr Josef Lang's son-in-law" by the bedclothes merchant Josef Pauly, supplier to the Royal and Imperial court, and passed on by him to Mr. Junghofer, chairman of the bedclothes makers' cooperative, in 1896 (cf. Pauly's autograph dedication note on the flyleaf); last in an Austrian private collection. Boards imperceptibly restored at lower spine end; interior slightly fingerstained; slight tears to two leaves, but in excellent state of preservation altogether. 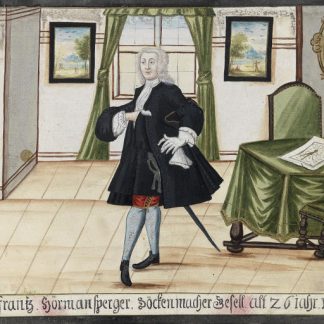