12 x 7.5 cm; containing a notebook, 10 ff. (blank) and two satin-lined pockets. Binding in straight-grain red morocco, the covers edged with an applied gold frame, the upper cover with a mounted plaque reading "Souvenir", the lower cover similarly decorated but reading "D'Amitie", fastened at the foredge with a gold pencil.

The covers and doublures bear a total of four mounted miniatures framed in gold under glass. These are (upper cover) Queen Maria Theresa of Habsburg-Lorena-Este (wife of Victor Emmanuel I of Sardinia), the miniature signed by Angelo Vacca; (front doublure) Maria Theresa of Savoy, Duchess of Lucca; (rear doublure) Maria Anna of Savoy, later Empress of Austria (as wife to Ferdinand I); the young Maria Christina of Savoy (rear cover, also signed by Vacca).

Maria Christina appears to be five or six years old in her portrait, which places the production of this charming keepsake at about 1817-1818. The artist was presumably the same for all four, Angelo Vacca (the younger) of Turin. He was one of the principal painters for the court of King Victor, which helps place the production of this charming piece squarely in the royal milieu. Stylistically, this is a precursor of the popular twentieth century Cosway bindings. A few earlier French examples exist, but as a class 18th and early 19th century bindings with original miniature paintings are rare, and we have not seen any with attached gold plaques and decoration such as the present example.

Light wear, but overall in very attractive condition. An extraordinary survival, presumably a gift from the Italian royal family. 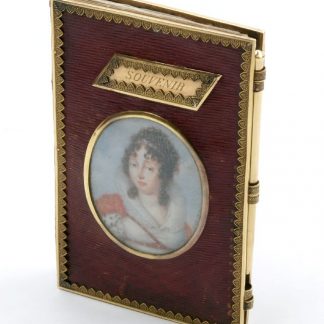