The Art of Memory

16 pp. With an ornamental woodcut initial on the title page. Papered spine.

Second edition of Sibutus's first published work, previously printed by Quentel in March 1505: a treatise on the art of memory. The humanist Sibutus (c. 1480-1528), probably from Tannroda in Thuringia, was a student of Conrad Celtis. Crowned poet laureate by Emperor Maximilian, he practised as a physician and taught rhetorics in Wittenberg, Rostock, Cologne, and Vienna. "This frequently cited and rarely discussed instruction by Sibutus contains within the space of 7½ pages so many obscure precepts, counter-productively mingled with verses by Virgil, Ovid, and others, that it must be quite incomprehensible to anyone unaccustomed with mnemonics. It is apparent that Sibutus employed a very difficult and roundabout method. So as to have no more than 36 mnemonic devices, he used the verse 'arma virumque cano' etc.; for each letter he would imagine a person whose name began with that letter etc. He does not explain how to avoid confusing these persons in case a particular letter occurs more than once" (cf. Aretin, Systematische Anleitung zur Theorie und Praxis der Mnemonik, Sulzbach 1810, p. 194ff.). More of a practitioner than a theorist, Sibutus was proficient in mnemotechnics himself: for Frederick, Elector of Saxony, he recited from memory 600 verses of his "Silvula in Albiorim", a poem praise of Wittenberg. The present volume includes two introductory poems by Johannes Murmellius and Johannes Cesarius, a dedicatory poem to the Lübeck jurist Heinrich Bucholt, as well as Sibutus's own "Carmen in vitam S. Annae".

Slight brownstaining throughout; insignificant waterstain to upper gutter. A single copy in the U.S. according to OCLC (Harvard Med. School). 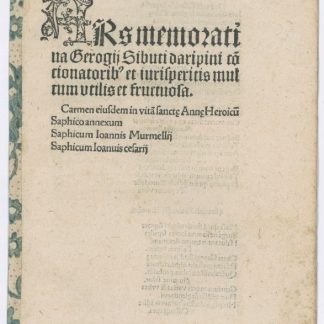