To the critic Alexander Berrsche. A long and comprehensive letter in which Strauss explains in detail what Berrsche had criticized in his review of an Academy Concert that Strauss had conducted: "You heard quite correctly that it was less 'vivacious', less 'dashing' than usual [...] the brass section remained 'unaffected' and 'subdued'. Beethoven's Scherzo was played (following Bulow's rule) in moderate tempo for the first time, and only the second repetition was played in full Vivace, the finale was played a third slower than is common among the world's most famous conductors and even Richard Wagner himself postulated (erroneously, in my opinion) [...]".

Includes a typed letter to Berrsche by the publisher, and a letter from Strauss to a Munich publishing house. 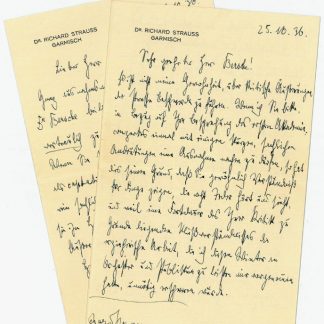