With a hitherto entirely unknown work of Gericault

Three series of Gericault's horse studies, each complete as published and in excellent impressions on strong wove paper (not watermarked), bound together with a hitherto unrecorded depiction of a sheikh on an Arabian horse. The first series, published as "Etudes de Chevaux lithographiés" in 1822, shows various horse races, including the Arabian horse as well as Egyptian, English, and French horses. "Cet ouvrage sera composé de trois livraisons, dont chacune contiendra quatre planches" (Beaux-arts de Paris). Second of at least four states throughout, stating the names of the artist and printer. The second series, published without a title in 1823, shows the various purposes for which horses are used (racehorses, military horses, cart horses and postillon horses, among others) and is complete as well with eight prints. The third series, likewise issued without a title in 1823, comprises seven prints depicting cavalry, trotters, a horse leaping over an obstacle, and a jockey on his horse, also including two oriental-themed plates: a lion devouring a horse and a fist-shaking "Giaour" (not from Géricault's Byron series). Three plates from this set are identified by Delteils as contemporary copies by Louis Courtin. The lithographed frontispiece of the first series was bound at the beginning of the present volume to serve as a title. The final leaves in this collection are the dead horse in the snow (an image inspired by Napoleon's Russian campaign) from Géricault's 1823 series "Quatre sujects divers" and a fine plate of a pistol-wielding Sheikh mounted on his Arabian steed, with an oriental desert settlement in the background (not recorded by Delteil). "Gericault est, sans conteste, un des plus grands peintres hippiques de son siècle [...] Les bonnes épreuves sont recherchées et et assez rares" (Mennessier de la Lance I, 545).

Of the utmost rarity: while the British Museum holds the complete suite of the first series, we were unable to trace any complete copies of the other suites contained in this sammelband. While numerous separate Gericault lithographs sold at recent auctions, realising up to £3000 each, not a single complete suite is listed in auction records of the last decades.

All prints are of exceptional quality, with rich contrast on superior paper, occasionally showing various degrees of foxing in the margins; a minute tear to the lower edge of the title leaf. Attractively bound in red half morocco with sparsely gilt spine. Altogether a beautiful copy in excellent, crisp condition. 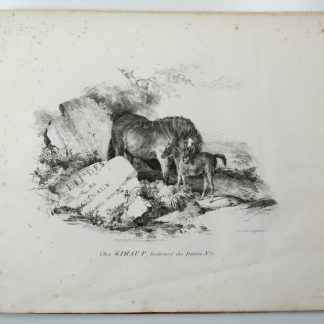