Prideaux, Humphrey. The True Nature of Imposture, Fully Display'd in the Life of Mahomet [...]. The Sixth Edition, corrected.

6th edition of this "often reprinted" (DNB) treatise, first published in 1697. Its scholarship depended in particular on Pococke. "Prideaux's literary reputation rests on his ‘Life of Mahomet’ (1697) [... of which] the story has been told that the bookseller to whom he offered the manuscript said he ‘could wish there were a little more humour in it.’ No sign of humour was ever shown by Prideaux, except in his proposal (26 Nov. 1715) for a hospital in each university, to be called ‘Drone Hall,’ for useless fellows and students. The ‘Life of Mahomet’ was in fact pointed as a polemical tract against the deists. [...] Some of its errors were noted by Sale in the discourse and notes to his translation of the ‘Koran,’ 1734" (ibid.). From the library of the British philosopher of religion, David Arthur Pailin (b. 1936), with his bookplate and notes laid in. 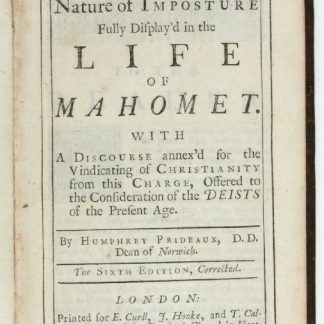