[Slave Trade]. Slave Trade. No. 1 (1876). Correspondence Respecting the Reception of Fugitive Slaves on Board Her Majesty's Ships. Presented to both Houses of Parliament by Command of Her Majesty.

Fascinating documentary material on the ramifications of international law concerning British treatment of runaway slaves in the Arabian Gulf region: in an official letter to the local Political Resident, the commanding officer of a British vessel crusing between Bahrein, Bubai, Abu Dhabi, and Sharjah inquires "what [he is] to do with the slave" who swam on board from one of the pearl boats on anchor under the Island of Zukool (6 Sept. 1873) - then a common problem, discussed extensively by the Admiralty, governors, consuls and commanders. 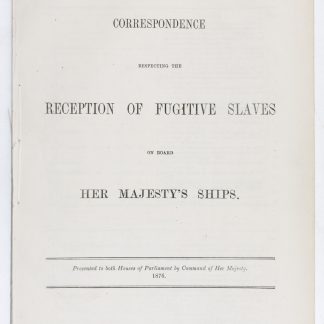