A Mirror for Princes, illuminated with 17 large miniatures, sumptuously bound

Lavishly illuminated manuscript on the knowledge of the world and state philosophy, the title of which might be rendered as "A Gift for Sovereigns". This important treatise was composed in 1817/18 on behalf of Prince Muhammad Taqi Mirza, son of Fath Ali Shah, the second king of the Persian Qajar dynasty, and is the major work by the Iranian philosopher Sayyid Ja’far ibn Ishaq Kashfi (c. 1775-1850), who lived in Borujerd in western Iran. Prince Muhammad Taqi (c. 1791-1848) was the eighth son of the Shah. He was regent of Borujerd but was imprisoned after the death of his father in 1834. The present manuscript with its rich illumination and magnificent binding was begun during the last years of Fath Ali Shah and not completed until after his death. Peculiarly, the manuscript is written in Naskhi rather than in the usual Persian Nastaliq script. While most Persian calligraphers could prepare their work in Naskhi upon request, this may serve to indicate that the manuscript is not a copy by a professional scribe, but rather the manuscript of a scholar (possibly by Kashfi himself?).

The ms. is dated "1151" at the end of the text, which must mean 1251, i.e. 1835/36 C.E. Written on western laid paper with several watermarks, including - in the first half - a prominent one with an eagle above a circle. The typical Qajar enamel binding shows charming cover illustrations of lavish flower bouquets with three birds; the inside covers show more conventional, stylized floral ornamentation. Several late 19th-century. ms. notes to reverse of the first leaf. With occasional edge damage professionally repaired or showing repairs by a contemporary owner (including final leaf: insignificant loss to text); colours show some bleeding to reverse. Some rubbing throughout, with the occasional stain. 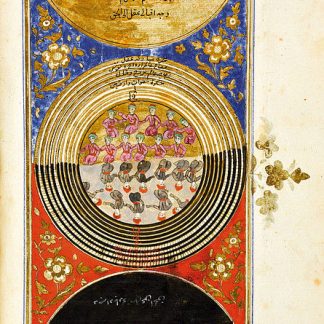