The Psalter in Arabic

First edition of this adaptation of the Psalms, set in Arabic-Latin parallel text. Printed in some 3000 copies, most of which were used for a 1619 re-issue with only the title page changed. Famous for the clarity and elegance of the typeface created by Savary de Brèves: the extensive vocalisation helped this handy quarto volume achieve immense popularity among oriental scholars throughout Europe. Formerly it was assumed that the type design was based on specimens Savary had seen during his time as French envoy at Constantinople; today his probable model is believed to be a calligraphical manuscript from Qannubin, preserved in the Bibliotheca Vaticana. The cutting and founding of the types were done in Rome, in collaboration with Stefano Paolini, an experienced printer formerly of the Typographia Medicea. The Psalms' text is based on a manuscript Savary de Brèves had bought in Jerusalem (cf. Balagna, L’imprimerie arabe en occident, p. 55f.); as it occasionally departs from the Vulgate (as does the translation by the Maronites Sionita and Scialac), an extensive imprimatur was necessary.

Bellarmin's Arabic catechism and the Arabic-Latin Psalter would remain the only works to leave the Typographia Savariana in Rome; the types have survived and are now in the archives of the Imprimerie Nationale in Paris.

From the library of the Biblical scholar Samuel Davidson (1806-98) with his ms. ownership to title page; binding slightly bumped, but a fine copy altogether. 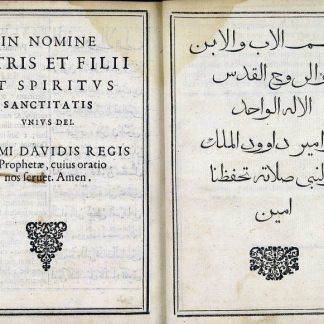