Brief introduction to the Armenian language for Catholic missionaries. "The types are those cut by Grandjon in 1579, and this is therefore a late specimen of that fount" (Smitskamp). Includes a table of the alphabet and the Lord's Prayer and Ave Maria in Armenian. "The best known products of the Propaganda Press, apart from its missals, grammars, and dictionaries, are the Alphabeta" (Smitskamp 193). This is, perhaps, litte surprise, for the missionaries sent forth to all parts of the globe by the Roman see through the Sacra Congregatio de Propaganda Fide, founded by Pope Gregory XV in 1622 for the purpose of spreading the Catholic interpretation of the Gospel, depended on language study textbooks such as these. The production of such alphabets was taken up as early as 1630 and was not discontinued until the early years of the 18th century; in 1812 the Congregation's in-house printing office was dissolved. 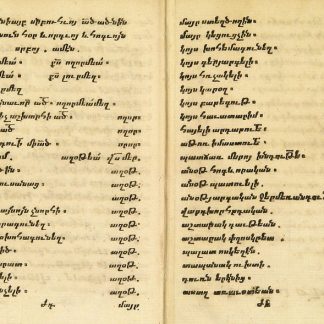