Extremely rare account of the military resistance to Ottoman rule in Albania, led by the Albanian noble George Kastrioti (1405-68), widely known as "Skanderbeg" (from Turkish 'Iskender Bey', 'Lord Alexander'). "A synopsis of Paolo Giovio's 'Commentario delle cose de Turchi' and Marinus Barleti's 'Historia de vita et gestis Scanderbegi'" (cf. Göllner), two of the principal 16th-century works on the man who, as most of the Balkans came under the suzerainty of the Ottoman Empire, increasingly was perceived as the late hero of the western world. "Skanderbeg's military skills presented a major obstacle to Ottoman expansion, and he was considered by many in western Europe to be a model of Christian resistance against the Ottoman Muslims. Skanderbeg is Albania's most important national hero and a key figure of the Albanian National Awakening" (Wikipedia).

Some brownstaining throughout. Formerly in the Ottoman collection of the Swiss industrialist Herry W. Schaefer. 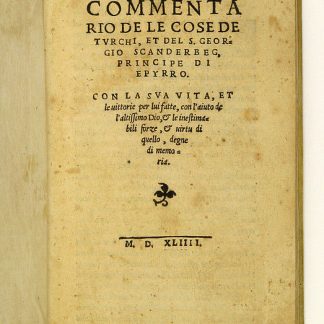