4to. Title and 24 pp., all inset into folio leaves. Marbled spine.

Rare contemporary manuscript copy of the peace treaty, in 22 articles, concluded between King José I of Portugal and the Sultanate of Morocco. After the Reconquista, Portugal had expanded into Africa, starting with the territory of Morocco, by occupying cities and establishing fortified outposts along the Atlantic coast. The Portuguese seized numerous Moroccan cities and built coastal fortresses there, but most of these had to be abadoned soon. When Tangier was ceded to England in 1661 and Ceuta finally handed over to Spain in 1668, Portugal's direct involvement in Morocco had essentially come to a close, and when King Juan I abandoned Mazagan under the pressure of Mohamed ben Abdallah in 1769, Moroccan reconquest was complete. Five years later, in 1774, the Governments of Morocco and Portugal concluded a Peace and Friendship Agreement, one of the oldest bilateral agreements of both nations. Ever since his accession in 1757, Sultan Mohamed had sought to adopt the European trading system, while simultaneously safeguarding the spirit of Islam amongst his peoples. To this end, he ratified earlier peace treaties with Great Britain and with the Netherlands, then went on to sign several more, beginning with Denmark, Sweden and Venice; similar treaties were closed with France and Spain (both 1767) and Tuscany (1782). A fundamental principle that was enshrined in all of them was rooted in the annual payment of a fee in cash or in kind.

Slight browning to inset leaves. Apparently removed from a 19th-century document collection, with the original leaves remargined to folio size. A principal document of Luso-Moroccan relations. 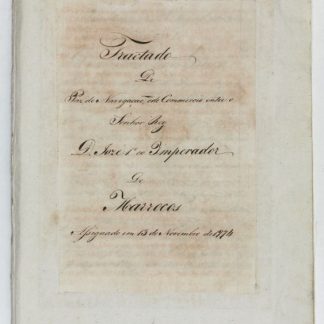