The last "Ricondotta" of Venice

First edition of Venice's anti-Jewish statutes of 1777, the last "Ricondotta" published by the republic. With the political deterioration of Venice, ever new repressive measures were enacted against the Jewish community, based increasingly on anti-semitic sentiment rather than economic motives. On 27 September 1777 the Senate passed a far-reaching decree banishing all Venetian Jews from the city that could not prove a right of residence or lived in the ghetto. Also, Jews were forbidden to maintain a manufacturing business or sell meat, grain, or any food at all. 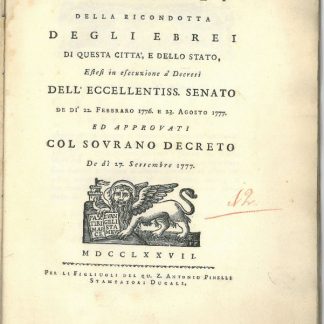