Inscribed by Döblin on the front flyleaf, a full-page quotation to Else Franke, dated Berlin, 30 May 1923: "Wir haben viele Seelen / und eine soll die andere / kennen. Laß Deine linke / Hand wissen, was Deine / rechte tut [...]" ("We have many souls, and one shall know the other. Let thy left hand know what thy right hand doeth"). Signed as "Linke Poot" and with his real name. Else (Leonie) Franke (née Stein, 1893-1958) was the wife of the Leipzig-born satirist and writer Walther Franke (later known as Franke-Ruta, 1890-1958), one of Döblin's friends among Berlin's literary scene.

The novelist, essayist, and physician Döblin, one of the principal figures of German literary modernism, is best known for his 1929 novel "Berlin Alexanderplatz". Georg Kaiser (1878-1945) was the Weimar Republic's most widely performed playwright until he was banned by the Nazis. 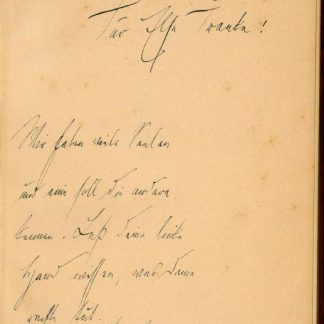