Two autograph Schubert trios after poems by Friedrich Matthisson, penned as a 19-year-old during a visit to his friends Albert Stadler and Joseph von Spaun at the Imperial seminary, which the young composer had quit in 1813. Stadler recounts these get-togethers, frowned upon by the seminary's headmasters: "Spaun would provide him with music paper, and the creative pen did not rest [...] On Sundays we had to attend the afternoon church services in nearby University Street, which always lasted the better part of an hour. Whenever Schubert visited, we would lock him in our study chamber for this period, hand him a few scraps of music paper and any old volume of poems that presented itself, that he might while away the time. Upon our return from mass we would usually find something finished, which he generously left me. I still own several such small compositions in their original autographs: [...] for three voices, [...] 'Am Seegestad' in lauen Vollmondnächten' [and] 'Ich denke dein, wenn durch den Hain' [...]" (Deutsch, Drei neue Matthison-Terzette, p. 56). Schubert had composed both melodies for a single voice as early as 1814 (D. 98/99). Both sheets, numbered "I" and "II" in Roman numerals at upper left, probably once formed the lower and upper parts of larger folio sheets trimmed above and below the present music. An arrow pointing to the upper right, added by a slightly later hand, links the two leaves among which the song "Andenken" is split. Contents in detail: leaf 1) beginning of a string quartet by Albert Stadler (D. app. I, 4); verso "Erinnerungen" (D. 424); "Andenken" (D. 423) bars 1-6. Leaf 2) continuation: bar 7-end; a few stricken musical sketches in pencil; a few indistinct pencil notes and the word "Autographe" in Stadler's hand on verso. Provenance: in the collection of Auguste Loderer, Frankenburg (Upper Austria) in 1978. 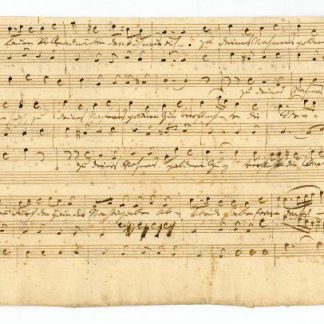