The first printed travel report of the Middle East

Editio princeps of the first illustrated travel report ever, considered the first authentic western source for the Near and Middle East, as the illustrations were prepared from actual observation of the lands and people described. A fragment, but in contemporary colour. Breydenbach travelled to the Holy Land in 1483/84 with a large company including the Utrecht artist Erhard Reuwich, who drew the maps and views from his observations on the journey and then printed the text and illustrations at his own house. He is not known to have published any other works. Following the traditional route, the entourage travelled from Venice to Corfu, Modon, Crete, Rhodes and Jaffa before arriving in Jerusalem, and then through the Sinai desert to Mt. Sinai, Cairo, and Alexandria on the return journey. The present first edition contains three large woodcuts, the first ever seen in the West, including panoramas of Modon, Rhodes, and Parenzo. Published in German in the year of its first appearance, the book quickly became extremely popular and was translated into French, Dutch and Spanish before 1500, but the large woodcuts were omitted from most of the later editions and translations. The present first edition also includes studies of Middle Eastern costume and pictures of animals encountered on the journey (including a crocodile, a camel, and even a unicorn). Wants four of the folding maps and views, as well as the woodcut of Bedouin costume and the Arabic script specimens.

Binding somewhat rubbed and scuffed; some browning and waterstaining to edges; several edge tears. Several contemporary marginalia. Contemporary ink dedication above beginning of text: inscribed to the Charterhouse of St. John the Baptist at Eppenberg (Hesse), in memory of the theologian Gottfried Bischoff; followed by a slightly later ms. ownership by Caspar Coryli from Hasselbach (received, via his uncle, from an endowment of the Carthusian Daniel Priscitius). Later ms. ownership of John Josias Conybeare (1779-1824), Professor of Poetry at Oxford, and armorial bookplates of Robert Blagden Hale (1807-83) of Alderley House, Gloucestershire. 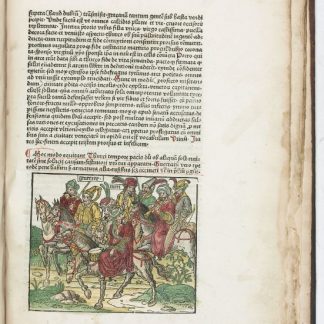