First edition. A detailed discussion of the Arabian Gulf coast in the early 19th century, with chapters on "the environs of the Mussendom promontory", "The Arabian coast between Ras Sheikh Monsud and Shaum", "The Pirate Coast", "The coast of danger between Debai and Eas Reccan", "Islands in the great bay between Debai and Ras Reccan", "Bahrein and its environs", and "The coast between Katif-Bey and the mouth of the Shatt al-Arab". Includes details on pearl fishing and notes on all the coastal settlements, today forming the United Arab Emirates: "Amelgawein", "Aymaun", "Shargah", "Debai" ("the inhabitants belong to the Beni Yass tribe and number some 1200 persons [...] Pearling yields an annual revenue of 20-30,000 dollars [...] The only freshwater springs are in the three small date gardens beyond the city"), and "Abuthubbi or Buthabin, a city with a small fortress", etc.

Published as part of a "collection of articles relating to the geography and hydrography of Asia". The other six parts of this rare work include a cartographical analysis of India, the Philippines, Assam, Bhutan, Syria, Arabia and the Nile, and the Himalaya. H. K. W. Berghaus (1797-1884) "is most famous in connection with his cartographical work. His greatest achievement was the 'Physikalischer Atlas' (Gotha, 1838-48), in which work, as in others, his nephew Hermann Berghaus (1828-90) was associated with him" (Wikipedia). 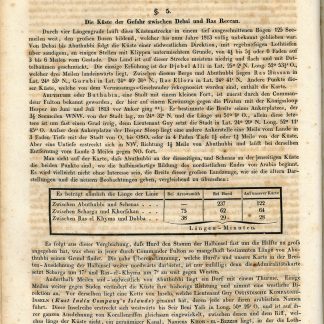