The Acts of the Apostles in Kosraean translation, printed at Honolulu

Rare edition of the Acts of the Apostles in Kosraean (Kusaiean), spoken on the islands of Kosrae, the Caroline Islands, and Nauru. The translation is by Benjamin G. Snow, a pioneer of the Micronesian Mission. He settled in Kosraea in 1852 and published several translations of parts of the New Testament from 1862 until his death in 1880, all printed at Honolulu.

The printer of the present booklet, Henry Martyn Whitney, was born at Waimea in 1824. He was educated in the United States, where he became acquainted with the printing trade, working as foreman in the printing office of Harpers & Bros, New York. Upon his return to Hawaii, Whitney became the editor of the newspaper "Polynesian". He later founded an independent newspaper at Honolulu and imported the first power press to Hawaii. 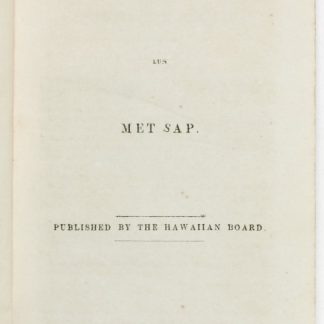