Insignia of the Third Class of the Order of the Brilliant Star, stored in custom-made red morocco case with gilt cover, lined in silk and purple felt (Elkington & Co., London). Includes: Letter of bestowal in Arabic. Form printed in gold and filled in in black ink (6 May 1913). Foreign Office letter announcing Royal permission to wear the decoration (T.D.S., 9 July 1913). Royal Warrant to accept and wear the insignia, signed by King George V and Reginald McKenna as Home Secretary (T.D.S., 21 July 1913). Additional material.

The Insignia of the Third Class of the Order of the Brilliant Star as conferred upon the British diplomat Edward William Paget Thurstan (1880-1947). The Star was bestowed in the early days of the long reign of Khalifa bin Harub Al-Said of Zanzibar, who ruled from December 1911 to October 1960. The Arabic dynasty of the Al-Saids ruled Zanzibar until the revolution of 1964. Khalifa bin Harub (r. 1911-60), ninth Sultan of Zanzibar, was descended from Said ibn Sultan (1790-1856), the last of the dynasty whose empire included not only Muscat and Oman, but also Zanzibar, where he had established his capital in 1840. Upon Said's death his realm had been divided: his third son, Thuwaini, succeeded him as Sultan of Muscat and Oman; and his sixth son, Majid, became Sultan of the wealthier Zanzibar. Long an area in which the British Empire exerted paramount influence, Zanzibar became a British protectorate in 1890.

Includes a later T.D.S. from Buckingham Palace to Thurstan (now C.M.G.), forwarding a medal "to be worn in commemoration of Their Majesties' Silver Jubilee 6th May, 1935". 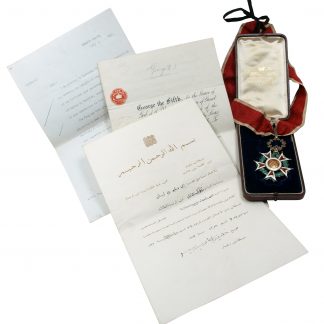