To an unnamed "Monsieur" aswering a request for a visit with details that Caillaux will be in Pairs on August 16th in the moring and would be pleased to receive the visitor at the mentioned address on Saturday, 17th, towards 9 o'clock in the morining: "Je serai de passage à Paris le 16 Août au matin. Je vous recevrai volontairs 22 Rue A. de Neuville le samedi 17 vers 9 hrs du matin [...]".

Caillaux was from June 1911 to January 1912 prime minister, then was forced to resign due to radical comments. In 1913/14 Caillaux again became Minister of Finance. 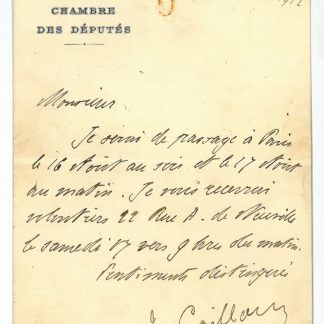