[Subscription receipt for the Walton Polyglot Bible]. Payment receipt for (Sir) John Gell, made out and signed by William Humble.

Payment receipt for the fifth instalment for one of the earliest works in British printing history published by subscription, according to Dibdin (I, 23) "the first book ever published in that manner in England": "Received this [10th] day of [June] in the year of our Lord God [1656] of [Jn. Gell Esq.] the summe of [two Pounds] being the [fourth] payment of [ten pounds] by him subscribed or promised, towards the printing of the Bible in the Original & other learned Languages: Witness my hand and seal, the day and the year above written".

The Bible edition for which Gell was eventually to pay 10 pounds is the Polyglot Bible edited by Brian Walton (1660-61), "the most accurate and best equipped of the great Polyglots" (Darlow/Moule, 23). The Oxford-educated orientalist Walton drew up a scheme for the project as early as 1847: "[H]aving secured the approval of the Bishops of London, Ely, Salisbury, Rochester, Lincoln, and Exeter, in 1652 he invited subscriptions for the forthcoming Bible, and entrusted the funds to the management of a worthy London citizen, William Humble. This polyglot was one of the earliest publications printed by subscription in England" (ibid., 23f.). The "worthy London citizen" Humble, who administrated the subscription payments and in whose hand the present receipt is filled in, is in all likelihood the London bookseller of that name, whose shop "The White Horse" operated in Pope's Head Alley until 1659 (cf. Plomer, Dict. of Booksellers & Printers).

Printing commenced in 1653, and the first complete copies were issued in 1658, "though some copies were not issued till after the Restoration, 29 May 1660" (ibid., 24). As a product of Protestant theology, the Bible was included in the 'Index Librorum Prohibitorum' as early as 1663, although it "could only be used by specialists, and these could hardly do without it" (cf. Reusch II, 119). Richard Simon admitted in 1692 that it "was praised by all Catholics, even in Rome" (cf. Reusch II, 125). In his 1899 DNB article on Walton, the orientalist D. S. Margoliouth assesses the merits of the edition: "While the Polyglot was justly regarded at the time of its appearance as an honourable monument of the vitality of the church of England at a period of extreme depression, and, from its practical arrangement, has been of the greatest use to biblical students, with whom, having never been superseded, it still commands a high price, it would also seem to have been a most successful commercial speculation. Though not absolutely the first book printed by subscription in England, it was one of the earliest, and, as has been seen, liberal support was given the undertaking from the commencement; and whereas the price paid by subscription was £10, other purchasers probably paid far more; in a letter to John Buxtorf the younger at Basle, Walton puts the price at £50" (XX, 727).

Somewhat wrinkled and with minimal damage to the edges (some touching text). 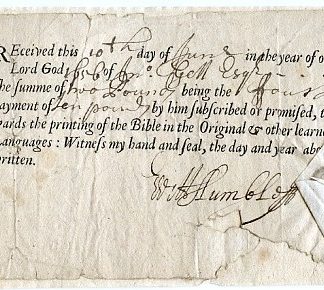 You're viewing: [Subscription receipt for the Walton Polyglot Bible]. Payment receipt for (Sir) John Gell, made out and signed by William Humble.London, 10 Jun 1656. € 2,500.00
Add to cart