A fascinating 1804 map of Persia by Christian Gottlieb Reichard. It covers from the Black Sea south as far as the Gulf and east as far as Punjab in India, including the modern day nations of Iran, Iraq, Georgia, Armenia, Azerbaijan, Turkmenistan, Afghanistan and Pakistan. The map identifies numerous towns, villages, deserts, mountain ranges, river systems and a host of other topographical features. The map is color coded according to territories and boundaries. The map curiously divides the country, as the title suggests, into the Eastern and Western Empire, suggesting suspicious political evidence. Furthermore, the islands in the Gulf are also erroneously shown as independent territories, suggesting political aspirations of the time. The map represents Persia under the Qajar Dynasty. In 1794, Aga Muhammad Khan of the Qajar Dynasty overthrew Loft Ali Khan, the last Shah of the Zand Dynasty, and relocated the capital to the new city of Tehran. The subsequent era, the Qajar Dynasty, witnessed numerous military conflicts with the rising powers of Imperial Russia and the loss of much of Persia's territory. 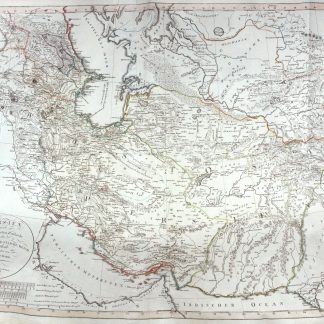