A key historical text on the Tonga Islands

Mariner, William / Martin, John (ed.). An account of the natives of the Tonga Islands, in the South Pacific Ocean. With an original grammar and vocabulary of their language. Second edition, with additions.

Second enlarged edition. The young William Mariner sailed in the privateer Porte au Prince to the New World with the objective of attacking Spanish ships and searching for whales. The crew seized several Spanish vessels and picked up a number of Hawaiian crew in 1806. A visit to the Tonga Islands proved fatal: almost the entire the crew was massacred by the natives. The author, however, survived and lived in the 'Friendly Islands' from circa 1806 until 1810, observing and recording the Tonga culture with a keen eye for detail. His account contains an elaborate dictionary and grammar of the Tonga language as well as several songs. Volume two, moreover, includes some interesting notes on James Cook, who had named the Tonga Islands the Friendly Islands in remembrance of the friendly reception accorded to him and his crew. Mariner states that the Tonga chiefs had in fact planned to kill Cook, but due to a disagreement on "the exact mode and time of making the assault" (p. 60) this plan was never executed. "Mariner's meticulous observations on Tonga make this a key historical text on the history and culture of this island group" (Forbes).

With inscription on endpapers and title pages; vol. 1 lacking half-title; spines chafed. Very good set with the armorial bookplate of the Tennant family on front pastedown. 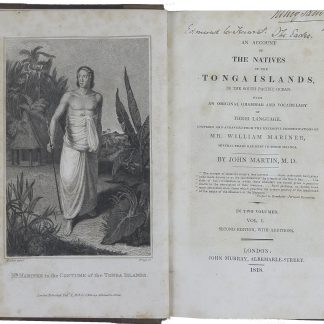