The most extensive Arabic catechism, with more than 1800 pages

8vo. 2 volumes. (40), "976" [= 980] pp. (8), "855" [= 847], (1) pp. Pages progress from right to left like a normal Arabic book. With an Arabic title-page on the second page of each volume, each with the Propaganda Fide's woodcut Jesus and apostles device and each preceded (on the back of the same leaf) by a Latin half-title. Further with woodcut tail-pieces, 1 woodcut decorated initial, and tailpieces and factotums built up from cast fleurons. Set in 2 sizes of nashk Arabic type, with the 13-page dedication to Pope Pius VI and a few other preliminary pages also in Latin on the facing pages, set in roman and italic type. Early 19th-century half sheepskin parchment, sewn on recessed cords with a hollow back, hand-lettered spine titles, shell-marbled sides, brown sprinkled edges.

First unabridged Arabic edition of the catechism translated from the Latin version authorized by the Council of Trent and the most extensive Arabic catechism ever published, comprising 1827 pages plus preliminaries. It follows the Roman Catholic rite and was printed and published by the Propaganda Fide in Rome. It is based on the Latin text authorized by the Council of Trent under Pope Pius V, first published in Latin in 1566. While some small Arabic catechisms of a few dozen pages had been printed as early as 1580, only a few more extensive ones had appeared, with Bellarmino's growing from 86 pages (not including the parallel Latin text) in 1613 to 411 pages in 1770 and De Beauvais and Richelieu's 1640 Paris edition comprising 415 pages. The present edition is probably the most extensive Arabic work that the Propaganda Fide ever published. Volume 1 is dated 1786 on the Latin half-title and it may have been issued without the dedication (quires *-2*) in that year, but the dedication is dated 22 December 1787 and volume 2 is dated 1787 on the half-title. The Vatican established the Propaganda Fide in 1622 to promote Catholic missionary work, especially in the Middle and Near East, and it set up its own printing office in Rome in 1626. The printing office acquired many types for exotic languages from various earlier Roman printing offices that had operated under the authority of or in close cooperation with the Vatican and also had many new types cut for them, mostly by their own in-house punchcutters. In this way they assembled what was probably the largest collection of exotic printing types in the world, most of them exclusive to their press. The press had declined in the 18th-century, but began to flourish again when the future cardinal Sefano Borgia took chage of the Propaganda Fide and Giovanni Cristoforo Amaduzzi of the press in 1770. The type used for the main text of the present catechism was cut for the Propaganda Fide, probably in-house, and first used for Tommaso Obizzino, Thesaurus Arabico-Syro-Latina, 1636. With a nineteenth-century library stamp, apparently from the Propaganda Fide's own college, in the unprinted areas on both Arabic title-pages (only partly legible, but apparently reading "Pont. Univ. de Propaganda Fide"). With occasional minor and mostly marginal foxing and an occasional quire slightly browned, but otherwise in very good condition, with only an occasional tiny hole or small marginal chip. Only slightly trimmed, preserving an occasional deckle. The most ambitious Arabic catechism produced to this date. 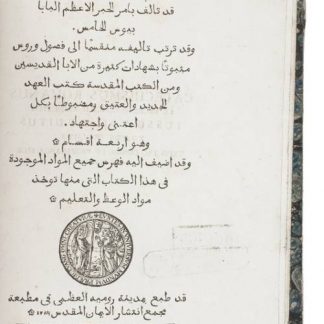