Near-contemporary manuscript copy of the 1554 relation to the Doge of Venice, by Domenico Trevisan, the returning bailo (resident ambassador) to Constantinople, about the Ottoman Empire and the duration of his station there. Much in the manner of present-day diplomatic cables and station reports, Trevisan gives an account of the ruling dynasty and the background of the various living or recently deceased family members to be reckoned with. He discusses the structure and hierarchy of the Ottoman administration, relations with foreign powers, events of foreign policy such as the ongoing Ottoman-Habsburg wars in Hungary, the weaponry of the army and navy (providing many new and vital details on the strength of the Ottoman galleys and their armaments, at a time when the Spanish-Italian fleet of Charles V under the command of Andrea Doria was suffering a series of successive defeats against the Turks), the tributes exacted from the various provinces of the Empire (departing in some details from the figures given by Alberi's edition), etc.

"The bailo's appointment usually lasted two years [... He] was obliged to send Venice information not only about politics and colonial affairs but also about the prices and quantity of the goods sold in local markets. A bailo was more important than a consul [...] The bailo in Istanbul began to deal more and more with the highest Ottoman authorities, even if extraordinary ambassadors or lower-ranking diplomatic envoys were also assigned to the city. When a bailo came back to Venice he had to deliver a detailed report or country study (Relazione). The office of bailo in Istanbul was usually much desired by Venetian noblemen because it was the only important position abroad that was profitable, not expensive. It was given to experienced diplomats who often went on to become doges" (Encyclopedia of the Ottoman Empire, p. 73).

Well preserved. Some browning and ink bleeding to other side of leaf, but in all well legible. Other manuscript copies of the same relation are known in the Bibliothèque nationale de France and the Bertoliana in Vicenza. 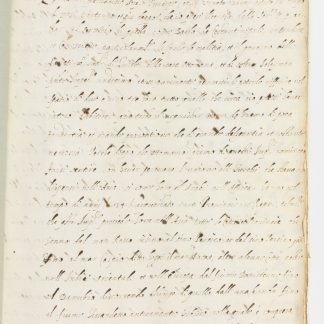