Diameter 4 cm. Signed "Die / Erde / in kleinem / C. B." Made up of twelve hand coloured engraved gores, the equatorial graduated in degrees, the continents coloured and outlined. With a folding hand coloured engraved sheet paper showing attractive pictures of twenty-eight members of different nationalities, each labelled in English and German. The strip 131 x 55 mm, attached internally to the marbled paper covered box.

A charming Victorian miniature terrestrial globe, an educational toy in its original box with a 28 joint plates showing the people of the world in native costume. It is one among a number of versions of such globes attributed to the Bauer family of German globes makers, produced for the English and Continental markets. Van der Krogt illustrates and describes a similar globe: the title is the same and "The name Vancovens In. is written at the northwest coast of America, indicating Vancouver's discoveries (end of the 18th century). The 19th century explorations of the polar regions are not recorded, so that the globe can be dated between ca. 1800 and ca. 1825" (Van der Krogt). 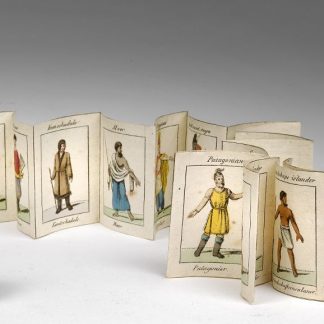