Rare first edition of this anti-Jesuit pamphlet, usually attributed to the multiple apostate Christian Francke(n) from Gardeleben in Brandenburg, who included it in his 1581 "Colloquium Jesuiticum", also published by Perna (cf. de Backer/S. II, 930). In fact, Francke did not leave the Jesuit order until 1579 and probably merely anthologized the text. More persuasively, Manfred Edwin Welti has argued for identifying the author with the Prague ex-Jesuit Adam Höller who renounced Catholicism in 1569 and died of the plague in Vienna in 1570 (Höller = Heller = bright = Albutius; Paulus = the convert). "When Höller apostacized, he bade his farewell not with a slam of the door but with a cautionary missive to his former friars and to the Pope [...] First, he praises the Jesuits for their regeneration of the 'bonae literae', then criticises the order's total devotion to the Pope and castigates their condemnation and persecution of parts of Christianity as heretics. He reminds the Jesuits not to bolster Papal power but to live in Christian humility. Their sophistry, he says, will not do to fulfill the divine commandments. His epistle closes with a long apology of clerical marriage, condemning enforced celibacy" (cf. Welti, p. 145f.). The publication of this work, issued under a false author's and printer's name, was liaised by the humanist G. B. Bonifacio (1517-97), who in his old age tended towards excessively idealized notions of concealment: during a stay at Vienna in 1570-73 he was given the manuscript for publication and passed it along to Basilius Amerbach, who finally persuaded Perna to print the pamphlet ("Gotthard" = "hard in God" = Petrus; "Vilarmus" = "phil-harmos" = "lover of cracks" = buttock = Perna). It may be noted that this rather ingenious attribution is supported by type analysis (cf. Welti, p. 144, note 13a).

Insignificant water- and duststaining; contemporary underlinings and slight worming throughout. Not a single copy in the trade since 1950. 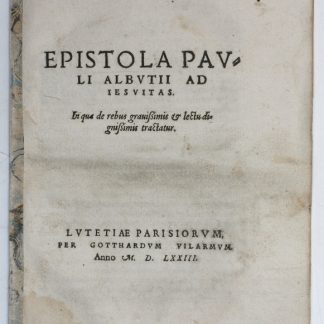