Diameter: 45.5 cms (18 inch), height in stand: 64.5 cm. An engraved terrestrial globe with 12 gores and 2 polar caps over a plaster-covered core, and the engraved horizon ring on the wooden stand, all coloured by a contemporary hand. In a contemporary wooden stand with 3 turned legs supporting the horizon ring, and 3 turned stretchers with a cylindrical centrepiece with a knob on the underside. Further with a contemporary brass hour circle and a slightly later iron meridian ring (and probably the axis pivots).

Only recorded copy of the 1848 edition (preceded only by one recorded copy of the 1846 edition) of Malby’s 18 inch (45.5 cms) terrestrial globe, the largest he engraved and much rarer than his 12 inch globe. “Debai” (Dubai) is shown on the Gulf coast, only 15 years after the al-Maktoum dynasty took charge of it in 1833. The globe seems to be intended especially for navigational use, with not only a grid of parallels and meridians (with the prime meridian through Greenwich), but also the irregular curved lines indicating the variation of magnetic from geographic north (“isogones”), at 5 degree intervals. From these one can clearly see where the magnetic poles were. Malby seems to be the first and almost the only globe maker to show them. The engraver signed the present globe “Chas. Malby” and signed the 12 inch globe of 1845 described by Dekker “C. I. Malby”. He must therefore have been Charles Isaac Malby (1816-post 1868). Thomas Malby, Charles’s brother, first set up as a globe publisher around 1839 and was trading as Malby & Co by 1841. Charles may have engraved nearly all of his globes. The earliest Malby globe known to survive is dated 1842, but his earliest recorded 18 inch globes are a pair at the Mariners’ Museum in Virginia: the celestial globe dated 1843 and the terrestrial globe dated 1846. The Austrian National Library has an 18 inch Malby terrestrial globe dated 1850, but we find no further example until 1872. The present 1848 example appears to be unique. The horizon ring has an owner’s stamp on the printed surface, nearly due east, apparently a coat of arms in a wreath, but difficult to make out. The horizon ring and globe have a dozen small cracks repaired and a few small gaps in the surface image, some repaired, but are otherwise in good condition. Extremely rare and lovely large globe, with the fascinating and unusual graphic presentation of geomagnetism. 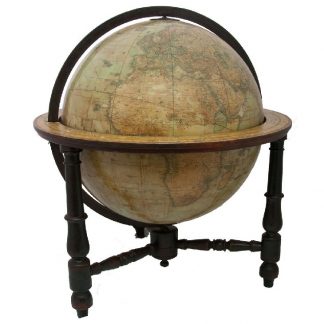