Quarto edition of Elmacinus's great chronicle, "Tarih al-muslimin" ("Kitab al-magmu` al-mu-barak"), translated by Erpenius. This "History of the Saracenes" is actually a history of Islam from the days of the Prophet up to the year 1118. Erpenius, professor at Leiden, is remembered as "one of the men whom the study of oriental languages owes its resurrection" (cf. VI, 329). "The translation of the second part of the 'Tarih al-muslimin', an Arabic chronicle written by the Copt Georgios Al-Makin in the thirteenth century. The first part was already missing from the manuscript which Erpenius used. The text and translation were published by Golius, who had to edit the last two chapters, where Erpenius had broken off. There are three editions: a folio edition containing text and translation; this quarto edition of the translation only, and a small-octavo edition of the text only. The manuscript used for this edition was lent to Erpenius by the Palatine Library, a fact which he acknowledges in the dedication to King Frederick of Bohemia [...] Next to the title and the dedication, the preliminaries contain a short anonymous note introducting the work to the reader (no date, no mention of an Arabic text), and a list of the Khalifs mentioned in the translation" (Smitskamp). 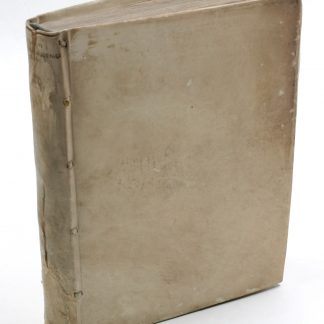