[Seymour, James, and Thomas Spencer (artists). Portraits and Pedigrees of the Most Celebrated Racers from Paintings by Eminent Artists, with portraits of the Jockeys.

A spectacular, exceedingly rare album illustrating the starting point of horse racing in England, when native mares were crossbred with imported oriental stallions. W. S. Sparrow notes, in 1922, "rare, no doubt, because so many copies have been broken up in order that the prints might be sold one by one". The integral engraved text surrounding the image of horse and jockey provides the history and breeding of the subjects of the portraits. The first three horses depicted in this charming album are direct descendants of the three foundation stallions of the modern Thoroughbred breed, namely the Godolphin Arabian (Bajazet, plate 2), the Darley Arabian (Childers, plate 3), and the Byerly Turk (Old Partner, plate 1). All of the other 23 race horses described here trace back to these three stallions just imported into England from the Middle East, as well. According to Pickerell, "all 500,000 of the world's thoroughbred racehorses are descended from 28 ancestors, born in the 18th century", of which, according to Peter Willett, about 50% have Arabian bloodlines, with the remainder evenly divided between Turkoman and Barb breeding.

James Seymour is recognized as one of the earliest English sporting artists. He was the son of a wealthy goldsmith and diamond merchant who supplied the plate for racing trophies. Seymour was passionate about racing and, in addition to drawing and painting them, he is believed to have owned racehorses himself; he was considered one of the most eminent horse painters of his age, and this important and rare album of charming engravings offers a true sampling of his work.

With armorial bookplate with cipher of George Simon Harcourt, Earl Harcourt (1736-1809) on front pastedown. Some early ms. annotations at beginning, some tears and repairs extending into text, first plate laid down. 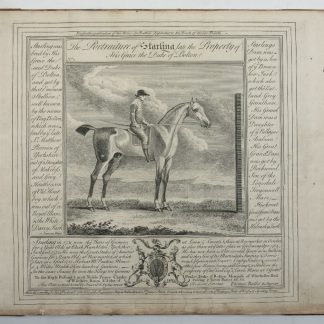 You're viewing: [Seymour, James, and Thomas Spencer (artists). Portraits and Pedigrees of the Most Celebrated Racers from Paintings by …Arundel and London, 1751-1753. € 35,000.00
Add to cart