The Royal Württemberg Stud: the first Arabian stud in the West

Fine set of original photographs showing the Royal Wuerttemberg Stud in Marbach and its famous horses. Owned by Wilhelm, King of Württemberg, Marbach was the first Arabian stud in Europe. From 1852 to 1871 it was directed by Baron Julius von Hügel, who purchased valuable stock from the Egyptian stud of Abbas Pasha, "thus raising it to the highest standard of excellence" (W. R. Brown, The Horse of the Desert, p. 161/166). Hügel was succeeded by Cäsar Paul von Hofacker (1831-96), who issued the present photo series and also composed the accompanying text: the latter discusses the history of the Stud and its horses, including the stallion Sanspareil, son of the Arabian Bajan and bred in 1816; in 1860 another pure-bred Arabian was acquired from the Wuerttemberg Weil Stud. Among the photoportraits are the pure-bred Arabian Zarif, his daughter Zinka, and the stallion Shah. Well-preserved. 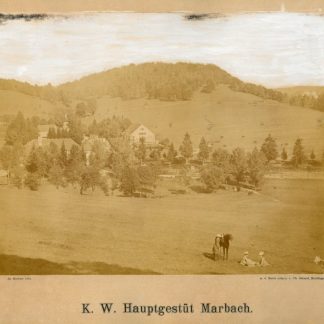