In 1798 Jollois had been a member of the French Expedition to Egypt; in Cairo he had been made resident engineer for the construction of bridges and roads. In 1799 he travelled through Upper Egypt, where he studied not only the archaeological artefacts, but also trade routes and the Nile irrigation system north of the First Cataract. Together with Édouard de Villiers du Terrage he discovered the tomb of Amenhotep III; he was one of the editors of the famous "Description de l'Égypte". Here, he signs as "L'ingénieur en chef, Directeur des p[on]ts et ch[auss]ées de la Seine / Jollois". 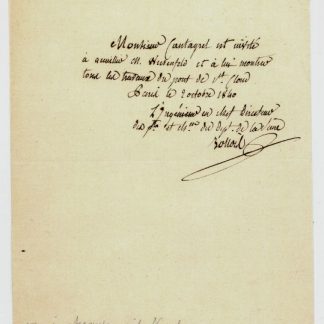