An einen namentlich nicht genannten Adressaten: "Respected Sir - I must ask you to kindly excuse me for the delay in answering your letter. I have been unwell & not able to do much work either in observing or corresponding.

I think we may safely consider that there are six well known & satisfactorily attested instances of real connection between the orbits of comets & meteoric showers. In addition of the four old cases there are Halley's comet & the Aquarids of May 1-6 and the Boötids of June 28 & Pons-Winnecke's comet, I discovered the shower of Boötids in 1916 & two of her observers in England saw it at a later hour (night of June 28). This shower will probably return in 1921 or 1922 or possibly in both years [...]". 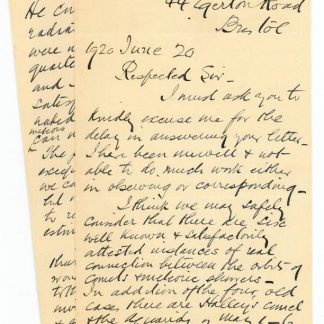