Highly important manuscript, being the author's autograph copy - possibly for presentation to the dedicatee (the King of Spain). Darrac's groundbreaking treatise on the admixture of Arabian bloodlines to the Spanish horse was subsequently accepted by the King and printed 'by Royal decree' in the following year, 1831. "To assure that Spain would have ready supply of quality horses and mules, the recommendations first purposed by Francisco Laiglesia Y Darrac in his brilliant 1831 book Memoria sobre la cria caballar en Espana - causas del aniquilamiento de nuestros caballos (Thesis on Horse Breading in Spain- Causes of the Annihilation of Our Horses) were finally adopted. Laiglesia might well be called the father of the Arabian horse of Spain, because he was the first to advocate the importation of a large group of desert-bred stallions and mares as the only means of recuperating the lost qualities in Spain's horses. In the same work he also articulated the first detailed plan for the creation of the Cria Caballar, the Stud Book Español, the National Stud" (Steen).

A horse expert with the Royal Army, Laiglesia's treatise is wonderfully detailed and shows a thorough knowledge of Arabians and their bloodlines. His main thesis argues that with the introduction of as few as 20 of the best pure-bred Arabians, the entire country's stock of horses can be 'regenerated' in a few generations. To this end he launches into an in-depth discussion of the logistics of this plan, ranging from discussions of the desert Bedouin origin of the purest Arabians, from the regions surrounding Sanaa and Nedjed-el-Areb in the Arabian Gulf (Section 65) to an intimate familiarity with the different classes of Arabians from these bloodlines (Hatiks or Kadischi & Kochlani). Laiglesia notes with admiration that the practice of recording the bloodlines of these Arabians is extremely meticulous at the court of the Emir.

Laiglesia also addresses the problems of how to select the best pure-bred Arabians based on proportion, etc., as well as the difficulties in procuring them. He insists that they must be purchased 'on-site' in Arabia Felix and then brought to a station in Aleppo for inspection, en route to Spain. Laiglesia even suggests the most comfortable means of transporting the precious horses (by warship, rather than a smaller merchant vessel which doesn't have enough space). Interestingly, one measure for Laiglesia of the superiority of Arabians is their excellence in horse-races: he points out that all the greatest English champions (Flying Childers, High Flyer, Eclipse, etc.) have all been bred from Arabian stock.

The present author's manuscript and its illustration in fact show significant differences compared to the printed book, which is itself extremely rare (just 3 copies worldwide, according to OCLC). 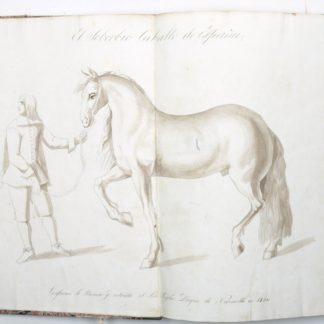