Large-scale genealogy of the House of Medici beginning in the early 13th century and ending with Gian Gastone de' Medici, the seventh and last Medicean Grand Duke of Tuscany. With his death in 1737, nearly 300 years of Medici rule over Florence came to an end. He was survived by his sister Anna Maria Luisa, Electress Palatine, for less than six years, and was succeeded as Grand Duke of Tuscany by Francis Stephen of Lorraine, soon to be Emperor Francis I. The present chart, apparently drawn up shortly after the extinction of the family in 1743, is decorated with several designs of the Medici arms dangling from the family tree's branches, and the names of the last three scions - Ferdinando, Gian Gastone, and Anna Maria - are drawn with their appropriate crowns, as are those of Popes Leo X, Clemens VII, and Leo XI. As the title announces, the genealogy includes the secondary branch of the Medici Family known as the Princes of Ottaiano (near Naples), here ending with Alessandro de' Medici (1560-1606), General of the Papal States. Descendants of this last remaining line, which still flourishes, unsuccessfully claimed the title of Grand Duke of Tuscany in 1737, and the Ottaiani's pretensions to the title would seem to have played a role in the preparation of this chart. 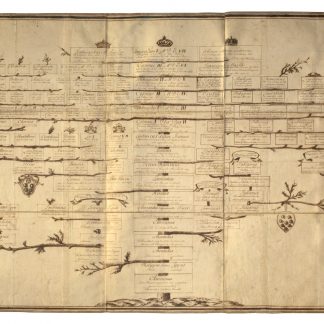