First edition; extremely rare (a second edition appeared in 1830). The first etymological dictionary ever to record Portuguese words of Arabic origin. "Arabica expressa sunt typis elegantibus" (Schnurrer). Both the Aboussouan and the Burrell collections (sold at Sotheby's in 1993 and 1999, respectively) contained only the 1830 edition (the Burrell copy, in a modern binding, was knocked down for £3,000). Entries are arranged alphabetically in Portuguese, followed by the equivalent Arabic word or source, a transliteration, and an explanation. Also included is a bibliography of works consulted. The Arabic element in the Portuguese language is the natural result of centuries of contact between the two cultures, which began with the Arab presence in Portugal from the 8th to the 11th century. By the 15th century the Portuguese had established trading posts on the African coast, especially in Morocco, and in the 16th and early 17th centuries they were closely involved in Oman and Muslim East Africa. Prior to de Sousa, a few Portuguese publications contained information on the Arabic element in Portuguese, most importantly Durate Nunes De Leao’s "Origem da Lingua Portugueza" (1606, reprinted in 1781), which contains a list of 207 Arabic words, and Manoel De Faria’s "Europa Portugeza", which contains 106 Arabic words (vol. 3, pt. 4, ch. 10). But de Sousa was the first writer to devote an entire work to the subject, drawing on a wide range of Portuguese and Arab authors to make his point. De Sousa was born in Damascus and became professor of Arabic at the University of Lisbon, as well as a frequently published member of the Royal Academy of Sciences. The next work to appear on the subject was that of Francisco De S. Luiz in 1837. 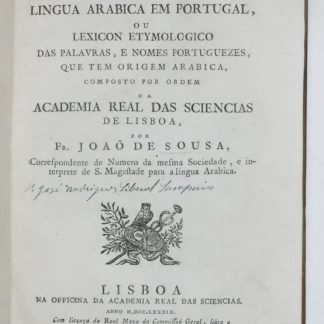