The first important work on the history of Egyptian medicine

Somewhat later edition of the first important work on the history of Egyptian medicine. Alpini (1553-1617) was an Italian physician and botanist who spent three years in Egypt studying botany and hygiene as a companion to the Venetian Consul Giorgio Emo. This work is considered "one of the earliest European studies of non-western medicine. Alpini’s work dealt primarily with contemporary (i.e. Arabic) practices observed during his sojourn in Egypt. These included moxibustion - the production of counter-irritation by placing burning or heated material on the skin - which Alpini introduced into European medicine [...] Alpini also mentioned coffee for the first time in this work" (Norman). Jacobus Bontius (Jacques de Bondt, 1592-1631), whose work on Indian medicine is included, was a Dutch physician and botanist. He travelled to Persia and Indonesia to study the botany of the area. He was the first to study cholera on the island of Batavia in 1689, before it was known in Europe, and died on Java. His botanic and medical works were published after his death by Pisonius. He "was probably the first to regard tropical medicine as an independent branch of medical science. He spent the last four years of his life in the Dutch East Indies, and his book incorporates the experience he gained there. It is the first Dutch work on tropical medicine and includes the first modern descriptions of beri-beri and cholera" (Garrison/M. 2263, citing the 1642 first edition). 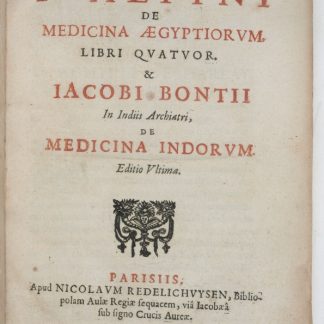