The first European illustration of the coffee plant

First edition of the earliest treatise on the native Egyptian flora, the author's most important scientific work. The Italian physician and botanist Alpini (1553-1617) spent three years in Egypt studying botany and hygiene as a companion to the Venetian Consul Giorgio Emi. He was "among the first of the Italian physician-botanists of the 16th century to examine plants outside the context of their therapeutic uses. Today this work is best known for containing the first European illustration of the coffee plant" (Hünersdorff). Alpini writes: "I saw in the garden of Halybey the Turk a tree [...] which is the source of those seeds, very common there, which are called Ban or Bon; from them everyone, Egyptians and Arabs alike, prepare a decoction which they drink instead of wine and which is sold in public bars just as is wine here and they call it 'Caova'. These seeds are imported from the Arabian peninsula [...]" (f. 26r, transl.). The coffee plant is pictured on f. 26v, captioned "Bon".

Binding rather rubbed and bumped (especially the spine); trimmed somewhat closely at upper edge; occasional brownstaining throughout with the odd waterstain; slight defect to title page repaired by a former owner. A good copy from the library of Karl Martin and Siri Hilda Karolina Norrman (1900-95) with their joint bookplate on front pastedown. 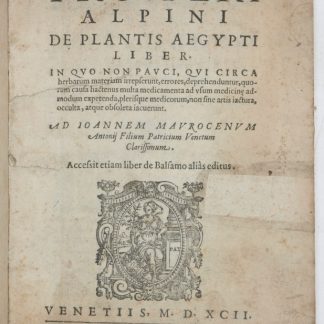