First edition of this fundamental study of Wahhabism, not translated into Arabic until 2005 ("Tarih al-wahhabiyin mundu naš'atihim hatta 'am 1809 m.", published in Riyadh by Darat al-Malik 'Abd-al-'Aziz). Corancez had lived in Aleppo for eight years as French consul. He married a Syrian and had first-hand information about the Wahhabi movement in Egypt, Syria, and Baghdad. He published his book soon after the followers of the Moslem reformer Abd-el Wahhab conquered the holy cities of Mecca and Medina in 1805, an event that fueled a strong interest in the movement throughout Europe. "This sect, which abhorred all loose living, attracted the attention of a number of travellers. Corancez' account of the Wahabis precedes by many years that of Burckhardt, which was published posthumously in 1830, although both men were living and travelling in Syria at the same time, and presumably knew each other" (Atabey). As Burrell comments, "the final merits - and challenges - of this book are [... that] Corancez was prepared to reflect upon a range of issues which remain relevant and controversial, for many people in the Middle East today. These include the nature of Islam and its apparent resistance to self-doubt and the challenge of change, the complex attitude adopted by Muslims to Christians and Jews, the status of the Prophet Mohammed within Islam, the reasons for the enduring nature of despotic rule in the Middle East, the significance of the different status afforded men and women [...]".

Includes the sometimes-lacking errata final leaf. Slight brownstaining as common; untrimmed as issued with the publisher's temporary grey-blue wrapper largely preserved. Spine chipped; upper cover frayed and partly pasted to half-title. The Atabey copy (in contemporary half morocco) sold for £3,800 at Sotheby's in 2002. 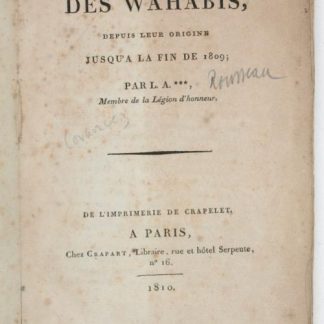