The first western book on the cultivation of dwarf trees, or "bonsai". Georg Liegelsteiner was court gardener to the Archbishop of Salzburg in Austria, Count Franz Anton Harrach. His book on dwarf trees, although now largely forgotten and overlooked in botanical and horticultural literature, proved extraordinarily successful in its day, achieving six editions including the original edition of 1705. Liegelsteiner "writes about dwarfing trees so that they look like a very beautiful big tree, but only much smaller. He understands tree physiology like only a small minority of bonsai enthusiasts today. He explains in detail how to shorten roots and transplant trees often, how to shorten branches, how to correct a one-sided tree. He explains how to cut back a tree to a stump, let the new shoots grow, cut them back at strategic points, let the new shoots grown again and cut them back. It is exactly the 'Chinese' clip-and-grow technique. He makes drawings which explain the development of a dwarf tree in a way that could not be improved" (Walter Pall, Dwarf Trees of George Liegelsteiner, in: Bonsai Magazine 3 [2000]). The edition offered here is the final one, published after the death of its author, with a very interesting new preface which attempts to sketch a history of dwarf trees in Europe. It suggests that the art of growing Bonsai trees came to Versailles in the late 17th century. One of the Versailles gardeners, Grottendorf, settled in Berlin and experimented more on it. Eventually he was appointed head gardener to the wealthy merchant and Councillor Georg Bose's garden, the "Kleinbosischer Garten", in Leipzig. Liegelsteiner received advice from Grottendorf about the art of growing dwarf trees. 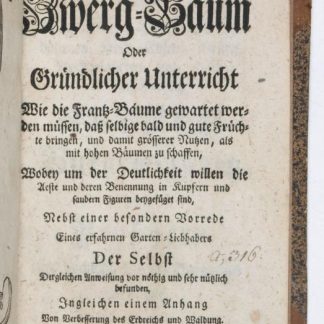