4to (263 x 213 mm). 3 parts in one volume. (2), IX, (1), 69, (1), 111, (1), 84 pp. With a general title-page and 3 part-titles, with an occasional decorated rule or cast fleuron. Set in roman and Javanese type with incidental italic and Arabic. Contemporary shell-marbled boards, sewn on 2 cords. Rebacked in later red cloth. Since the endpapers (including the pastedowns) come from the same stock as many of the printed leaves, the book was probably bound in Jakarta.

First and only edition, printed in Batavia in the Dutch East Indies (now Jakarta, Indonesia): one of the earliest, best and most extensive introductions to the Javanese language, written and compiled by Johann Friedrich Carl Gericke (1798-1857) for Dutch speakers who wished to learn Javanese. Part 1 ("Eerste gronden der Javaansche taal", 69 pp.) gives a general introduction to the language and writing system, discussing the origin of the language, its scripts, the various parts of speech and the numbers. Part 2 ("Javaansch leer- en leesboek", 111 pp.) gives sample texts: conversations, letters, stories, legal documents (including ones on adultery and on abducting women for marriage), the "Dhoso-nomo" (a moral or religious text) and the "Papali" (a 16th century poem). The sample texts appear in the Javanese script on the rectos with a phonetic transcription in roman type on the facing versos. Part 3 ("Woordenlijst, ...", 84 pp.) is a Javanese-Dutch lexicon, also giving Arabic equivalents for some words.

Gericke, born in Brandenburg, Prussia, was director of the Javaansch Instituut at Surakarta and worked more than 30 years for the Nederlandsche Bibelsgenootschap, making the Javanese language his principal field of study.

As early as in 1820 the governor-general of the Dutch East Indies had given P. van Vlissingen at Surakarta the task of establishing Javanese printing, and Van Vlissingen found the young Cornets de Groot to advise him. No Javanese type had ever been produced before, so together they developed a system for rendering the complicated Javanese writing system into typographic form. Joh. Enschedé & Zonen in Haarlem took the order to produce the type in 1822, and their punchcutter Martinus Hübner finished cutting it in 1824. The first specimen appeared in 1825. The occasional Arabic is a rare example of a modern use of Nicolaes Briot's large Arabic typeface, cut for Willem Jansz. Blaeu shortly before Briot's death in 1626 and first extensively used in 1635. It was also cast by Enschedé.

Provenance: bookseller's ticket of Maisonneuve et Cie. of Paris, ca. 1840: Jean-Claude Maissonneuve set up in 1838 by acquiring the business of Théophile Barrois, and the ticket notes the succession. Also with a ca. 1890 (?) armorial bookplate of the "Bibliotheca Lindesiana" assembled by Alexander Lindsay (1812-80) and his son James Lindsay (1847-1913), 25th and 26th Earls of Crawford, near Manchester, England. "The Bibliotheca Lindesiana was a vision of the human intellect, an ideal too high for any man to achieve, but one to which two men, father and son, both of remarkable attainments, came closer than anyone else, before or since" (N. Barker, Bibliotheca Lindesiana [1977], p. xiii). The elder Lindsay took an interest in oriental languages already in 1837/38, when he visited the Middle East, so he may have bought the present book from Maisonneuve not long after that, and it was certainly in his son's library in 1910. Finally with the 20th century letterpress bookplate of John Lawson on the front pastedown.

In very good condition and with generous margins. Binding rebacked and nearly separated from the book block at the front hinge (with one sewing support broken); marbled sides rubbed and scuffed. One of the earliest, best and most extensive introductions to the Javanese language, printed in the East Indies. 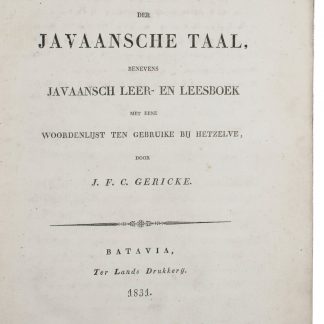