Considered lost: unique specimen of the rarest and most sought-after view of Mecca

Considered unobtainable: the large-scale engraving of the earliest view of Mecca, the press run of which was thought to have perished in a fire.

This engraving was commissioned by the orientalist and diplomat Mouradgea d'Ohsson. Of Armenian extraction but born in Pera, on the European side of Istanbul, Mouradgea was fluent in Arabic and Turkish. He rose in the Swedish foreign service at the Ottoman Porte and was made minister plenipotentiary in 1782 before moving to Paris in 1784, where he was to publish his grand account of the Ottoman Empire. In the second volume of this magnum opus, "Tableau général de l'empire othoman" (1787-90; a posthumous third volume would follow in 1820), Mouradgea had included a double-page view of Mecca, drawn after his instructions by L. N. de Lespinasse and engraved by Berthault: a fine bird's-eye view of the Haram of Mekka and its environs during the Hajj. A year later, in 1791, he had a significantly larger version of the same view engraved by the brothers Charles-Nicolas and Joseph Varin, just before returning to the Swedish embassy in Turkey after the Revolution had made his position in Paris untenable. Although in Constantinople he is reported to have sold prints of the same to Muslim pilgrims and Christian travellers (cf. Hunglinger [1804], p. VI), today no copies of the Varin view can be traced in libraries, museums, or private collections: as the British Museum states in the description of a copy made 12 years later (supposedly after the "Tableau" view), "the entire press run" of this "earliest view of Mecca", produced by "Ignace Mouradja d'Ohsson in 1791", was "[ravaged by] the great Pera fire [...] in that same year" (item 1871,0513.28). The last person to report having owned a specimen was the Austrian orientalist Andreas Hunglinger, who in 1804 wrote that he had in vain sought to obtain one during his 1798 sojourn in Constantinople, but in 1802 had finally received a print from a Pera art dealer who suggested that Hunglinger have it copied.

The copy, engraved in Vienna by Carl Ponheimer, appeared in 1803. In a separate brochure issued to accompany the print, Hunglinger claimed to have redrawn the view completely: "I lent the picture more proportion, more perfection and posture in light and shadows, added numbers to the principal monuments and provided their local names beneath the picture, all of which gives my copy notable advantages over the original" (p. VII-VIII). In fact, comparison shows that excepting the numbering and the key at the bottom (of which the smaller 1790 engraving also could boast), Hunglinger's changes were very minor indeed - no changes in the proportions or shading are evident, and even the size apparently remained very much the same: the British Museum exemplar of the Hunglinger print, acquired from George Ellis in 1871, measures 883 x 497 mm, while that sold by Sotheby's on 9 May 2012 (lot 155 - the only copy ever known to have been auctioned, commanding no less than £87,650!) measured 850 x 487 mm.

In promoting his own production, Hunglinger admitted that a similar view was still available in the second volume of Mouradgea's "Tableau", "but that is from a different perspective, smaller and treated with much more liberty, and not engraved by C. N. Varin (in spite of the fact that the author had availed himself of his services for several other fine things in the said work); also, it is a year older than the present one. In addition, I have seen many other [similar] engravings and even drawings in the possession of Turks and Armenians. The former assure me that these drawings are made by professional Turkish artists who sell them to pilgrims. These as well as all engravings I studied closely were entirely similar to this present plan, but none was so extensive in its scope, so large, so possibly perfect as this present one, which is why I considered it worthy of my direction and labour [to copy and publish it]" (p. IX-X).

Very faint waterstaining to margins; minor wear along creases with a few reinforcements on verso, but a splendid, richly detailed print with crisp contrast. A unique survival. 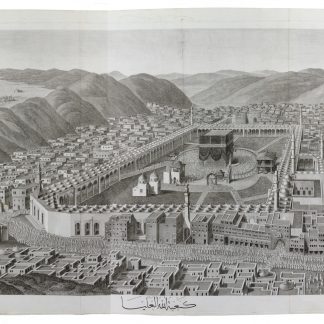