Rare first and only edition of a catalogue of the plants found on the island of Java, Indonesia. The work was published in three volumes, the first containing descriptions of plants not recorded by Rumphius and Houttuyn and the second and third listing all the plant names in Latin, Dutch and Malay/Javanese, with reference to Linnaeus, the Malay/Javanese set in roman type. The volumes were printed at the presses of the Dutch East India Company (VOC) in Batavia on the island of Java (now Jakarta, Indonesia).

Jacobus Cornelis Matthieu de Radermacher (1741-1783), started as a Dutch merchant in service of the Dutch East India Company (VOC), and rapidly rose in position in the company. By 1781 Radermacher was named Commissioner for the Fleet and the Army, and Common Council of India. He was one of the founding members of Bataviaasch Genootschap van Kunsten en Wetenschappen and a proponent of the establishment of the botanical gardens of Buitenzorg. In 1783 he left for Holland because of his health, but was murdered during a mutiny on his way home.

With a tiny tear in the second leaf and a couple of minor spots, otherwise in very good condition and only slightly trimmed, but lacking pp. 85-102 of volume three. Leaves E1-E2 of the same volume are included twice. The spine of the wrappers is tattered and its foot completely gone. 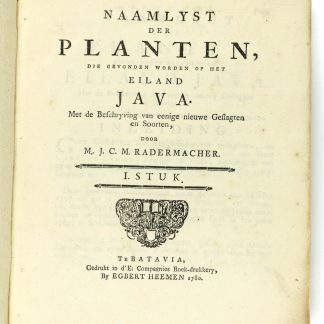