The earliest complete translation of the Qur'an into a European vernacular

Rare first edition of "the oldest complete translation of the Qur'an into a European vernacular" (Encylopedia of the Qur'an). Du Ryer's work served as the basis for further translations of the Qur'an into English, German, Dutch, and Russian, and was instrumental in introducing Europeans to the tenets of the Muslim faith. Du Ryer was a celebrated linguist and had lived in Egypt and Turkey, where he studied classical Arabic. His introduction briefly summarizes the Muslim religion for Christian readers, noting customs such as Ramadan, circumcision, the practice of having as many as four wives, the significance of Mecca and Medina, Sufi brotherhoods and wandering ascetics, and finally the Islamic recognition of Jesus as a prophet but not the son of God. A prayer printed in Arabic is included on the verso of leaf e2.

"Du Ryer's translation of the Qur'an [...] became an unparalleled literary success [...] The easy availability of the Qur'an accompanied a newfound interest in the Orient; additionally, du Ryer's translation lacked the polemical tone of previous editions, an orientation which arose mainly in ecclesiastical contexts. Du Ryer used Islamic commentaries such as al-Bayawi's Anwar al-tanzil, the Tafsir al-Jalalayan by al-Mahalli (d. 864/1459) and al-Suyu i (d. 911/1505), or an excerpt from al-Razi's (d. 606/1210) great commentary made by al-Raghi al-Tunisi (d. 715/1315) entitled al-Tanwir fi l-tafsir, quite casually in his translation, merely noting them in the margins. The deprecatory tone present in the introductory chapter, 'Sommaire de la religion des Turcs,' can be understood as an attempt at camouflage (cf. Hamilton and Richard, André du Ryer, 94f)" (Encyclopedia of the Qur'an).

Some waterstaining throughout; occasional worming; more pronounced edge damage near end. Provenance: 1714 ms. ownership (partly stricken out) of the Castelnaudary Capuchins, dissolved in 1789; acquired by the notary J. L. E. Bauzit of Castelnaudary (his ownership on title and flyleaf). 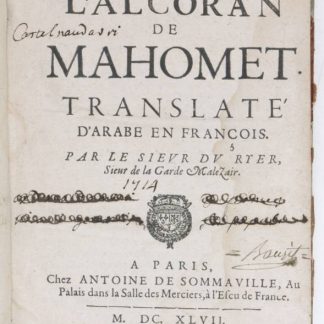