[Slave Trade]. Class B. Correspondence with British ministers and agents in foreign countries, and with foreign ministers in England, relating to the Slave Trade. From January 1 to December 31, 1867. Presented to both Houses of Parliament by command of Her Majesty.

Rare British parliamentary papers concerning the slave trade on the eastern coast of Arabia, particularly, that conducted between Muscat and the Qasimi dominions of Ras Al-Khaimah and the Musandam Peninsula, but also mentioning the Bani Yas, Ajmani, and Amalgavine tribes (p. 125), and a visit to Khamis Bin Ahmad, ruler of Fujairah.

A letter from the Governor of Bombay in Council to Sir Stafford Northcote, Secretary of State for India, forwards "papers relative to the Slave Trade on the Muscat Coast" and further states that: "The suggestion contained in Colonel Pelly's letter of the 3rd ultimo [printed as one of the twenty inclosures with the Governor's letter], as to the necessity for employing cruizers at the mouth of the Gulf, between Jask and Mussendom, seems to us sound and practical, and we trust that means may be devised for carrying it into effect." Inclosure 1 to the Governor's letter, a letter from H. F. Disbrowe, the Political Agent, Muscat, to the Secretary to Government, Bombay "submit[s], for the information of Government, extracts from the diary of my journey, performed overland from Muscat, in the Indian Ocean, to Ras-el-Khymah, in the Persian Gulf", noting that "the journey was performed during the close of the spring and the opening of the summer of the year 1865, and the extracts refer to the Slave Trade as existing between Muscat and Mussendom." Inclosure 2 is headed: "Slave Trade. Eastern Coast of Arabia. Extracts from Lieutenant-Colonel Disbrowe's Diary of his journey (overland) from Muscat, Capital of the Sultan of Muscat's Dominions, to Ras-el-Khymah, Capital of the Joasmee Chief's Dominions." The first of the five extracts reads, in part:

"Musnaah, March 16, 1865. I gained other information to-day. If my informants can be relied on, the curse of slavery still lies heavy upon the people of Batinah, and many hundred slaves are yearly brought from the Zanzibar districts, and landed at places on the coast between Muscat and Mussendom. I was told, but cannot believe, that some 500 in number reach every year in the neighbourhood of Musnaah ["about sixty miles by land north of Muscat" (footnote)] alone. […] On enquiry into the reason of this, I gathered that it was owing to the influence of the wild and uncivilized Bedouins. The Bedouins inhabiting the numberless villages that stretch along the Batinah plain in vicinity to the sea-shore, are more powerful than of yore. They have built for themselves fortlets. They own date plantations. They own vessels. They disregard the commands and authority of the Al-boo-Saeed. […] Slaves are landed not precisely at Musnaah, but secretly at places on the shore opposite Bedouin strongholds. Once landed, they are disposed of by private sale, regular brokers being the go-betweens to conduct the sale operations. The selling price may range from 10 dollars minimum to 40 dollars maximum, young slave girls fetching the highest." In the fourth extract from his diary, Disbrowe makes suggestions for the deployment of two Indian navy vessels: "one [...], sailing or steam, fully equipped for boat service, to be off Ras-el-Hudd, to be mostly at anchor, but occasionally to move a little north and south of her appointed anchorage" and "a second [...], a steamer of light draught, likewise well-equipped with boats, to be on the move between Ras-el-Hudd and the entrance to the Gulf, searching every vessel Treaty engagements permit her to search." He opines that such a "course, if strictly adopted [...], would, in a few years, go far to extinguish, probably extinguish, the Oman traffic, go far also to extinguish the Persian and Turkish traffic viâ the Gulf." In the fifth extract he records his meeting with "Khumees bin Ahmed, Lord of Fujeerah": "I did not like him. I found him repulsive and unpolished. There was, too, something mysterious about him. He seemed afraid to move beyond the limits of his domain. I could not help, however, admiring his independence of bearing in other respects." The final "Zanzibar" papers (pp. 132-136) express "uneasiness among European residents at [the] approaching advent of Northern Arabs at Zanzibar." Also includes reports relating to the fate of Dr. Livingstone, as well as to the progress of negotiations with Majid bin Said, Sultan of Zanzibar, intended "to put a stop to the export of slaves by the Northern Arabs". 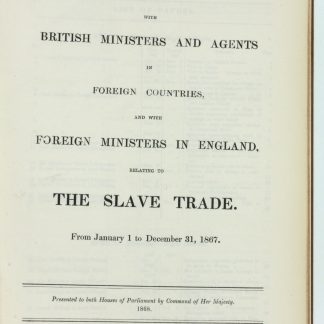