[Slave Trade]. Slave Trade. No. 1 (1875). Correspondence with British representatives and agents abroad, and reports from Naval Officers, relative to the East African Slave Trade. Presented to both Houses of Parliament by command of Her Majesty. 1875. [C.-1168].

Rare British parliamentary papers and correspondence with local agents and officers on the slave trade, including a report on the results of the treaties entered into with the Sultans of Oman and Zanzibar and of British ships cruising off Ras al Hadd and the southern coast of Arabia. Also, a report to the effect that of the nearly 12,000 slaves marched north from East Africa since December 1873, "few, if any, have reached Arabia, and none have been shipped for the Persian Gulf [...] There is still undoubtedly a constant supply of slaves from the Portuguese Settlements in the Mozambique to the coast of Madagascar, and it is even supposed to be the intention of some of the Arab slave-dealers to attempt to run dhows from the north end of Madagascar direct to the Persian Gulf in large seaworthy vessels" (p. 120). The relevant sections are "Zanzibar" (pp.1-89); "Muscat" (p. 90); "Reports from Naval Officers [relative to the East African Slave Trade]" (pp. 96-139).

Neat stamp on the upper cover. Spine cracked in places, but a good copy. 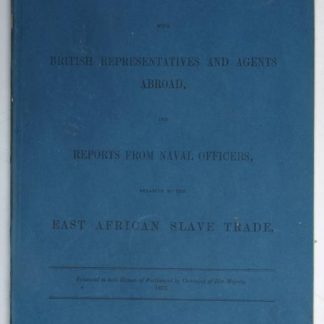