Slavery and all the Sheikhs of the Trucial Coast

[Slave Trade]. Report from the Select Committee on Slave Trade (East Coast of Africa); with the proceedings of the Committee. [H. of C.] 420.

Almost unobtainable work on the British Foreign Office's attempts to suppress the slave trade on the east coast of Arabia and Africa and especially in the dominions of the Sultan of Zanzibar. The Committee Report contains examinations of Commanders who had visited the Gulf; they outline the role of the Arab tribes of the Gulf in slavery (p. 2-4); provide details on the increasing demand for slaves in the Gulf due to the cholera (p. 28); recommend enforcement of existing treaties with the Gulf chiefs (p. 39); and give accounts of the rarity with with slave vessels are captured in the Gulf proper (p. 81). The appendix (pp. 89-210) offers, inter alia, the extract text of the treaty signed with the Arab Chieftains of the Gulf at Ras-al-Khaimah in 1820 (" The vessels of the friendly Arabs bearing the flag above described..."), as well as of the treaties, agreements and engagements entered into between 1838 and 1847 with Sultan bin Suggur, Shaikh of the Joasmee (Qasimi) tribe; Shaikh Khalifa bin Shukhboot; Shaikh Makhtum of Dubai; Shaikh Abdullah bin Rashid of Amalgavine; Shaikh Abdulaziz of Ajman; Shaikh Said bin Zahnon of Abu Dhabi; and Shaikh Muhammad bin Khalifa of Bahrain; separate agreements were entered into with Zanzibar and Muscat. 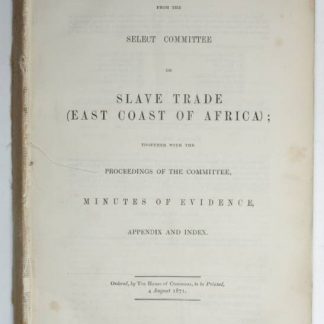