Printed and bound at the first Arabic printing office in Lebanon

First Dayr as-Shuwayr edition. "The Evangelion of the Greek Church, containing the Gospels arranged for liturgical reading throughout the year" (Darlow/M.). From the printing office of the Melkite monastery of St. John the Baptist at al-Shuwayr in the Lebanese Kisrawan mountains, operative between 1734 and 1899, during which time it produced in all 69 Arabic books, including re-editions (cf. Silvestre de Sacy I, pp. 412-414; Middle Eastern Languages and the Print Revolution. A Cross-Cultural Encounter, Westhofen 2002, pp. 179-181). Altogether, this is the second edition of this Melkite version which first appeared in 1706 with liturgical explanations. 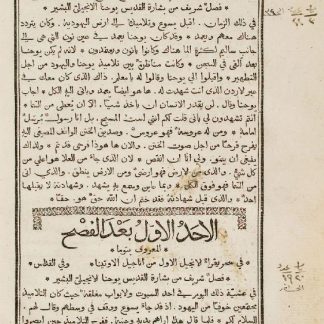