With an early mention of Kuwait

Amsterdam legal injunction against the mother, father, and brother-in-law (formerly defendants and now counterclaimants) of Frans Canter, manager of the VOC factory at Basrah from 1746 till 1750, who had infamously fled his post when he was to be replaced by Tido Baron Kniphausen. Fearing exposure for having embezzled Company funds, Canter had escaped to nearby Grain (Kuwait): "Sig van Bassoura door de vlugt heeft geretireert naar Green" (p. 4, no. 46). He continued his flight by caravan to Aleppo, then to Iskenderun, and finally by ship to Amsterdam, "where the East India Company was unable to get him prosecuted by the autonomous government of this town.

Canter's flight to Grain is a typical manifestation of a basic characteristic of Kuwait. Its essential function in the life of the Gulf at that time was that it was an area outside the sphere of influence of the Ottoman Government of Basra. In this way, it could serve as a refuge for both persons and trade when, for one reason or another, there was risk of trouble in Basra. This little desert trading town was born and continued to grow because of the simple fact of its being outside the troubled area of Ottoman Iraq" (Slot, The Origins of Kuwait, p. 117). Canter is also memorable for having composed, in the course of his escape, the first known letter written in Kuwait. While the original is lost, a contemporary copy made by an Amsterdam notary during these legal proceedings now rests in the General State Archives of the Netherlands (cf. Slot, p. 117-121).

Slight duststaining to the wide margins. A rare survival. 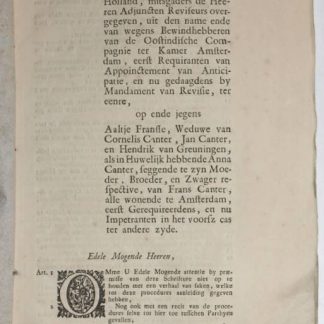