All the Ottoman Sultans

Only edition of this lavishly produced series of portraits showing the Ottoman Sultans from the 14th to the 19th century. Captioned in French and Arabic. The editor, Ahmad Faris al-Shidyaq (1804-87), was born in Lebanon to an Arab Maronite family. He converted to Islam in 1860 and spent much of his later life in Istanbul as the editor of an Arab language newspaper, "El-Jawa’ib". In recent years, scholars seem to have taken a renewed interest in Ahmad Faris al-Shidyaq and his role in the "nahda", or Arab renaissance of the 19th century. Several biographies have been published recognizing his struggle to modernize the Arabic language and educational system, as well as his defence of Arabic culture and language against the Turkization movement across the 19th century Ottoman Empire. As such he is considered one of the founders of modern Arabic literature and journalism.

Minor foxing to reverse of plates, otherwise in perfect condition. 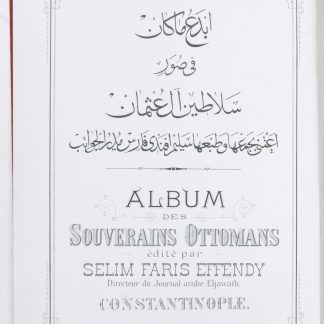